Teddy Knight is a much loved cockatoo with a cheeky personality.  A fun loving character, he is a big fan of toys, and particularly Lego.  He loves nothing more than playing with his Lego bricks and even carries them with him on his outdoor adventures.

This well loved parrot comes from a very caring home.  It’s a multi-animal household and his humans are experienced in bird keeping, providing love, care and enrichment to this beautiful cockatoo.

Teddy loves to go on daily walks with his human and they regularly take walks in London city, seeing the sights and historical landmarks.  In their trips into the countryside, Teddy enjoys getting back in to nature and having short flying sessions.

Teddy is fit, healthy, energetic and agile, getting plenty of exercise and enrichment in and out of the home; this has allowed him the necessary confidence to work on set in professional roles.  Having lived around a variety of animals as well as humans, Teddy is able to work with any animal on set that he would not consider prey or would consider him prey.  This will of course be supervised carefully and sensitively by his handler.

A very sociable cockatoo, Teddy loves nothing more than cuddling up with his handler and going on their walks together.  He documents his adventures on his Instagram account and shares the joy with his loyal army of followers. He truly loves the attention from humans, making him a joy to work with in a studio.

Cockatoo Teddy Knight is stunning in both looks and nature.  He is beautiful whilst comical, serene and elegant whilst talkative, cute and amusing.

The umbrella cockatoo (also known as the white cockatoo or the great white-crested cockatoo) is well-known in keeper circles as one of the most affectionate and affable companion birds.  They have a comical charm which captures the imagination of an audience, and Teddy is no exception.

This is a diurnal species, so finds it best working during the day and during daylight hours which is particularly suitable for working on set.

As this bird is classed as ‘vulnerable to endangerment’, umbrella cockatoos are now a protected species.  This makes them an impressive exotic bird to feature in any media project.

Umbrella cockatoos are native to the tropics of Indonesia. These birds originally hail from the Maluku Islands in the central and northern parts of the archipelago, so filming that includes the features of this landscape will suit Teddy down to the ground.  However, because he’s a well socialised bird that thrives in multiple environments, Teddy is able to work in town and city areas as well as the great outdoors.  He works particularly well in a studio environment and isn’t put off by busy and noisy rooms.

Cockatoos are rarely aggressive and they form strong bonds with their caretakers; this means that Teddy works brilliantly with his handler, aiming to please and following instruction well.  He is social and intelligent and can be trained toa brief.  The species is capable of learning and performing a wide variety of tricks, though Teddy has a whole host of skills in his armoury already. Easily trainable, Teddy is a real superstar of the screen

These affectionate birds love to cuddle with their person, bird, or even object or toy of choice.

True to his breeding, Teddy is gentle, docile, and sweet-tempered by nature.

Whilst the species is not known for its mimicry of human speech, Teddy loves to screech loudly to vocalise his excitement.  He has also learned a few short phrases and can speak with encouragement as he’s shown in his previous film experience.

Teddy is able to wear costumes, clothing and accessories as required for his acting roles.  He has confidence in buckets and is beautifully tame so can work with actors and actresses he hasn’t met before.  He can work with humans of all ages since he is such a relaxed bird.

Teddy is a cockatoo with pristine white feathers.  He is calm and relaxed, so is easy to work with in a photography studio environment.  He is also agile and excitable which is perfect if you need to capture action shots.  Teddy can free fly indoors and for short spells outdoors, so flight pictures are easily captured.

His vibrant white colouring works beautifully in photography and really makes a statement.  This is perfect for product placement requirements.  Teddy is also very sociable, so excels at working with models, where he is comfortable being held by humans of all ages.

Teddy has beautiful white feathers with a bright yellow spray of feathers underneath his tail.  He is a fine example of his breed; umbrella cockatoos are primarily white across the body with a pure white crest. The yellow colours can be seen in cockatoos when courting a mate (or sometimes showing other emotions such as excitement, fear or even frustration).  The crest will rise into an impressive umbrella-like fan, hence the name.

This attractive umbrella cockatoo can hold items with his feet or beak, which helps in product advertising shoots and merchandising.  This works particularly well for branding where a logo may be colourful and can stand out against Teddy’s white plumage.

White colouring looks great against any background so Teddy is a great option if you’re working with brand colours and a palette that is patterned or vibrant.  Additionally, if you’d like this bird to wear clothing or accessories, Teddy can pull off any colour without clashing.  Likewise, if you’re working with awkwardly coloured backdrops, the white on Teddy will stand out as he has a bright, visible appearance.

His white and bright yellow underneath works fabulously out on location either in urban or rural settings.  This calm, fun, and handleable parrot is happy to work with close-up photography, flash photography and in a variety of locations.  He is an incredibly versatile bird model.

Due to his beautiful temperament and striking good looks, Teddy Knight is a wonderful asset to any studio project.  He and his handler are experienced and easy to work with.

Brand ambassador and mascot for Babes in the Hood; a clothing store specialising in fashion for parrots, Teddy is a rather dapper bird model.  He models and promotes this stylish clothing via his Instagram page where he has a firm fan following and high engagement levels as a micro influencer.

This talented parrot has starred in films and music videos; most notably working with The Prodigy.  He has also worked with major brands in the advertising world on top of appearing in a large amount of press, both bird and animal titles, as well as fashion magazines.

Cockatoo Teddy Knight is experienced on set, friendly, easily handled, and a joy to work with.  His skills and beauty make him an exceptional addition to media projects involving stills photography or film work.

LADBible vs THREE: ASMR with animals “Relaxing Stuff“: eating and talking in a studio full of other animals

Babes In The Hood – Brand ambassador 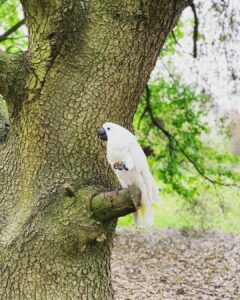 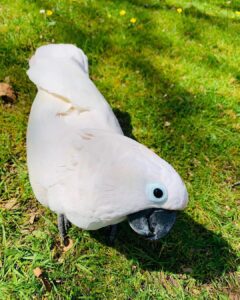 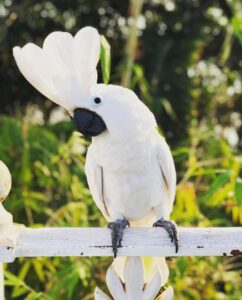 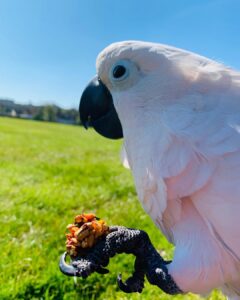 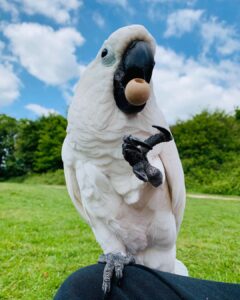 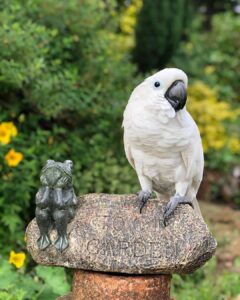 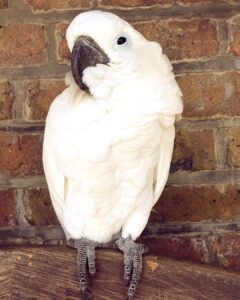 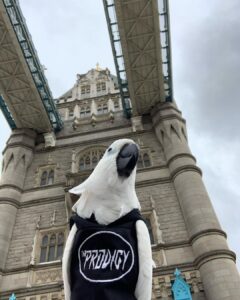 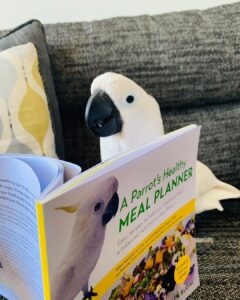 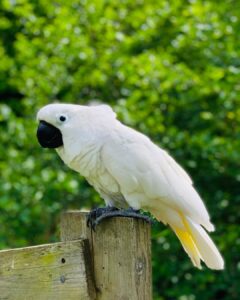 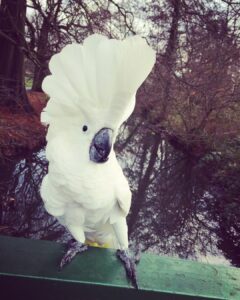 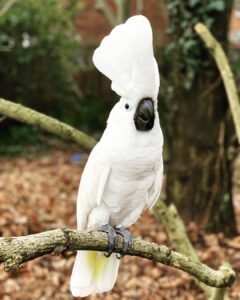 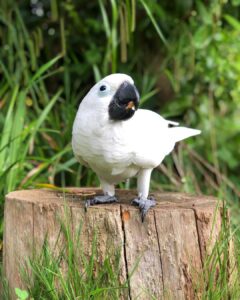 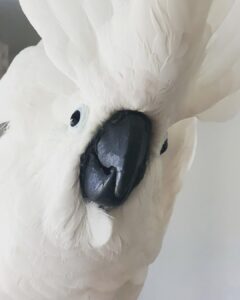 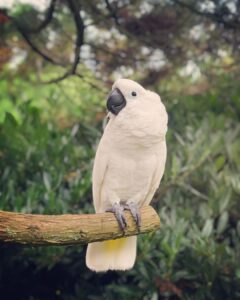 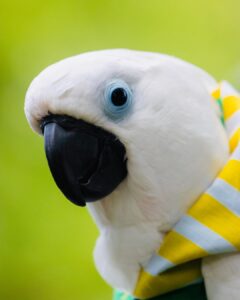 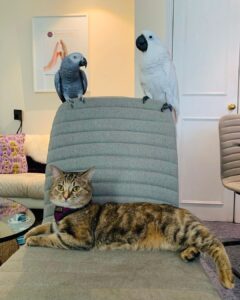 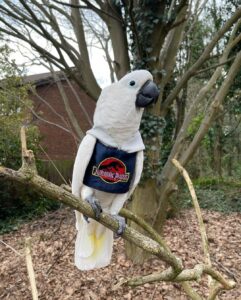 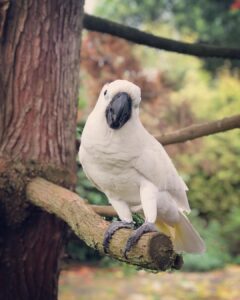 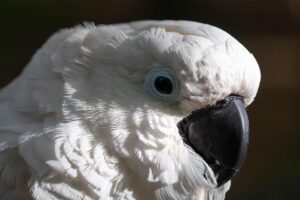 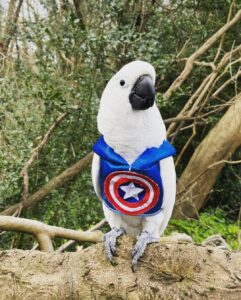 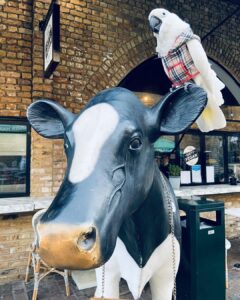 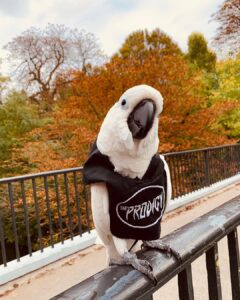 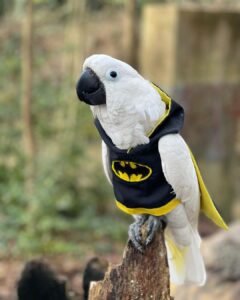 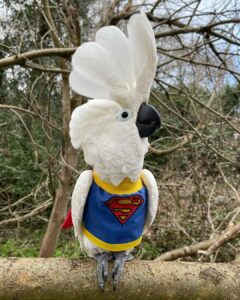