Arthur is a big snake with a big personality.  He is adventurous, inquisitive and confident.  This well-loved snake comes from a rescue background.  However, he has been well loved and cared for throughout his life, and was only relinquished due to his previous owner’s ill health. This middle-aged snake is now settled in his forever-home, living the life of luxury!

Arthur is fit, healthy and agile, getting plenty of exercise and enrichment in and out of his vivarium; this has allowed him the necessary confidence to work on set in professional roles.  Having lived around a variety of animals as well as all ages of humans, Arthur is able to work with any animal on set that he would not consider prey.  This will of course be supervised carefully and sensitively by his handler.

A very sociable snake, Arthur loves nothing more than cuddling up with his handler, going for an explore around his reptile room, and then snuggling up in his hide within his vivarium.   He truly loves the attention from humans, making him a joy to work with in a studio.

Arthur the California Corn Snake has striking markings with vivid colours of red, gold and black on the back with more muted tones on his belly.  An experienced on-set snake, Arthur is a breeze to work with.

Corn snakes are among the hardiest snake species in existence so handle beautifully and cope with stress well.  They are among the most calm and docile snakes in the reptile world. Because they are not prone to biting, defecating, or constricting when under stress, they work particularly well in filming environments.

Due to his gentle temperament, Arthur is the perfect corn snake for many film shoots.  He is easily handled by children and adults alike.  Arthur is an incredibly sociable snake and simply loves human interaction.   He is a confident snake that can work with actors under supervision from his experienced handler.

Calm, confident and puppy-tame,  Arthur can be handled by children which means he is suitable for filming with all ages, including young children.  Arthur is relaxed and chilled out, so we rarely witness unpredictable movements from him.

Out of his vivarium, Arthur is very adventurous and his inquisitive personality is a joy to behold.  He is completely at ease in new locations and environments, making working in different environments easy for him.

Indigenous to the south east and central regions of North America, this corn snake will suit film sets or locations that reflect those habitats.  However, with a little imagination, we can picture Arthur against urban backdrops, graffiti-scapes, and gritty realism themes or could equally be at home in fashion shoots, juxtaposing with luxurious backgrounds.

This corn snake comes from a busy household and is used to being around dogs, cats and children. In his neighbourhood, he is a bit of a celebrity as he often takes walks out and about with his handler, catching the natural UV rays.  Arthur is truly happy in any environment so is the perfect snake for on-set or on-location filming.

It is worth noting that the corn snake species require suitable heating and UV lighting according to their breed requirements.  They shouldn’t be without correct heating and light for extended periods.  Corn snakes should not be worked with when they are ‘in shed’ as this can cause discomfort to the snake.  Shedding is when the snake naturally sheds their skin.  They are generally more active in darkness, but can work during the day happily.

Snakes are the perfect addition to film sets where mystique is required,  They have often been used in music videos and live performances, though there are many situations where snakes are appropriate.

In many cultures, the snake (due to the ability to shed their skin) represents rebirth, transformation, immortality, and healing .  They are also known to symbolise fertility and are considered ‘a creative life force’.  In some historical depictions, the snake represents sexual desire and passion.

Arthur is a bright and vibrant red corn snake, with an alert yet calm temperament to boot.  He can happily model alone around props and does particularly well with product placement, and he excels at working with models, where he comfortably can dangle around the neck of a stranger if required.

True to his breeding, Arthur is a very colourful snake, displaying vivid colours of red, orange, gold and black.  The overall appearance of the corn snake reminds one of brightly coloured Indian corn, from which it probably gets its common name.  His striking markings will work nicely against backdrops of block colours where his beautiful markings can really be shown off.

This attractive snake is an impressive length and can be pictured in a tightly curled wrap, or spread out, exhibiting his size in an appearance akin to a hose pipe!

Because of the bold colouring of his scales, Arthur looks exceptional in dark settings and can also master exotic surroundings.

Arthur is a calm snake that is happy to work in close-up photography, with flash photography and in a variety of locations.  He is an incredibly versatile snake model.

Arthur is a film-experienced corn snake.  He has featured in two TV commercials and has had excellent feedback on each occasion from the production team and film crew.  He was selected based on his stunning appearance and friendly nature; both excellent attributes in the media industry.

Due to his temperament and striking looks, Arthur is a wonderful asset to any studio project.  He and his handler are experienced and easy to work with.  He has an exceptional temperament that is well suited to media work.  He is calm, yet alert and active when required.  His nature and character is trustworthy and he always fulfills his briefs fully.  This experienced snake is perfect for studio work.

32Red –  TV commercial for casino company. Worked with Keith Lemon and had to wrap around a waste paper bin plus move towards the camera

Foxy Bingo – TV commercial for casino company.  Had to wrap around a tree branch and move towards an actor dressed up as a fox.  Performed as backup snake on the day and was utilised in shooting. 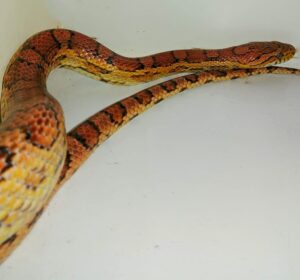 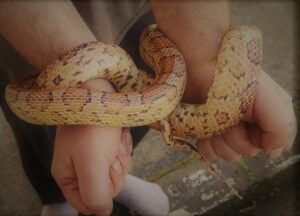 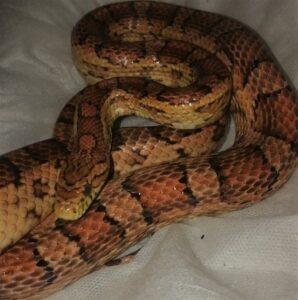 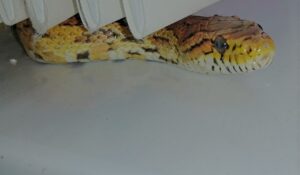 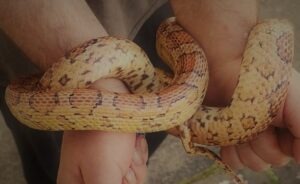 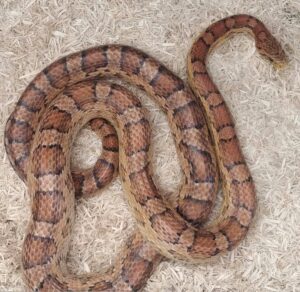