Ronnie the corn snake is a striking example of the species which is mainly found in the South Carolina locale.

The striking colours that Ronnie displays evoke the autumn tones of the Carolina landscape.  The corn snake is often mistaken for the venomous copperhead snake (Agkistrodon contortrix), but the two species share few attributes other than colour.  However, if you’re looking to replicate this species in filming safely, the corn snake is your best bet.

In Ronnie’s case, his base colour is a vibrant solid orange with saddle patches that are even more vivid, a deep blood orange to a near-maroon colour. He also has a very distinctive chequered underbelly which will look fantastic on film..

Ronnie was rescued from Cheshire Reptile Rescue and although slightly malnourished upon adoption, he is now thriving in his forever home and at a good weight for his species.  Despite this, he has clearly been a well handled snake and he has become a very friendly companion to his new human.  Named after Cristiano Ronaldo, Ronnie shares some attributes with the football superstar; he wears red and he is super quick in movement!

Ronnie is not only a beautiful corn snake that looks striking on film, he’s also very easy to work with.  True to his species, Ronnie has a docile nature and the amiable disposition that corn snakes are renowned for.

Corns are a species that appear to enjoy human attention and will usually happily stay with their human out of the vivarium for several hours.  Ronnie is no exception and enjoys the human touch.  He can be shy at first when he comes out of his vivarium or hide, but once in contact with human skin he is positively confident!  Although a large (or should we say “long”?) snake, Ronnie can safely be handled by people of all ages, including children, under supervision from his handler.

Ronnie is quite a rapid snake in movement, though always moves with purpose.  His ground action is fascinating to capture on film.  He will also climb and will beautifully support himself on objects as required.  Ronnie is also comfortable working outside providing correct precautions are being taken.

While snakes are often considered furtive or even dangerous, a corn snake is noted for his domesticity and being a docile pet.  They have funny facial expressions and are often considered one of the ‘cute’ species of pet snake.  For this reason, Ronnie will suit a variety of filming themes from comedy, to cute and friendly, as well as dramatic and dark filming opportunities.

Ronnie makes a fabulous model because of his vibrant markings and sedate temperament.  He is easy to work with and appears stunning in photography.  He is sleek and purposeful yet has the most adorable, cute face.

Snakes in general make wonderful photography subjects.  They have been associated with some of the oldest rituals known to man and represent dual expression of good and evil.  Ever since Eve’s transgression in the Garden of Eden, snakes in Christianity have been associated with lies, evil and temptation. But in other cultures, as far-flung as ancient Greece and Egypt and indigenous North America, snakes symbolise fertility, rebirth, renewal and even immortality.

Snakes are sleek and clean cut and make a striking image.  If looking for action shots, Ronnie is the corn snake for you; he has adorable facial features and looks particularly cute with his mouth open.

Ronnie is suitable to work out on location as well as in a studio; he can tolerate slight changes in temperature which allow for a variety of background imagery.  Capable of being handled by a variety of people, Ronnie can also model alongside children.

He is a truly beautiful snake that will make a fantastic addition to your photoshoot.

Although Ronnie is yet to have professional studio or film experience, he is a wonderful snake and we are sure that you will be pleased with him in the studio.  His handler has worked hard at socialising him and introducing him to new environments so that we know he will be bulletproof on set.  Ronnie is a fine looking corn snake and will make a wonderful addition to your media project. 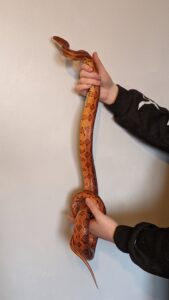 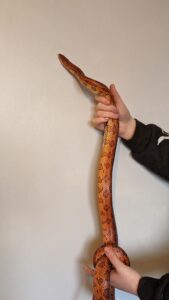 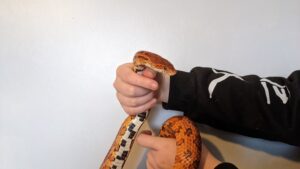 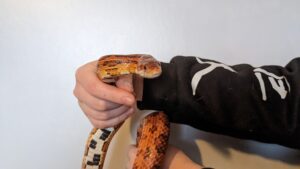 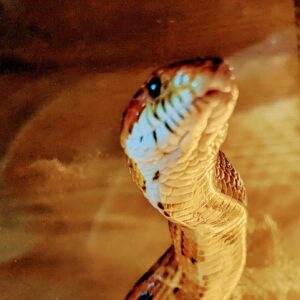 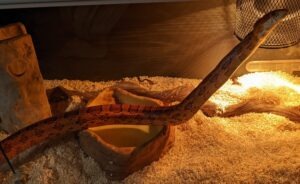 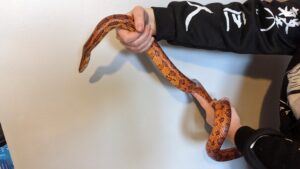 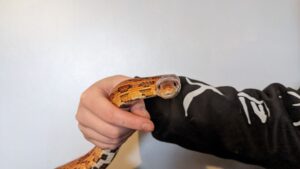 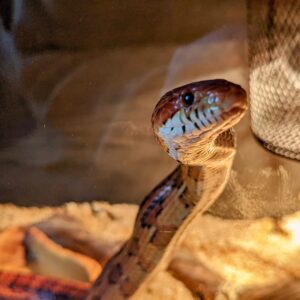