Bearded Dragon, Georgie, is a young adult, and is showing confidence in his behaviour.  After a difficult start in life, Georgie is now living his best life with free roam of the house, a fully enriched vivarium and even an outdoor enclosure for the warmer days.

Georgie was adopted from Cheshire Reptile Rescue, having been abandoned in a flat when his humans were evicted.  Sadly, Georgie wasn’t found for three months and when he was located, he was dehydrated, malnourished and in poor shape.  Due to his poor upbringing and difficult life, unfortunately, Georgie has a kink in his tail and a slight underbite.  However, this doesn’t stop him!  He is thoroughly thriving in his new home.

Georgie is named after footballer George Best, partly because of his vibrant red markings, like the shirt colour of Manchester United FC.

The central bearded dragon (sometimes named the inland bearded dragon) is a species of agamid lizard found in arid to semiarid regions of eastern and central Australia.   The species is one of the most popular pet reptiles, and is often exhibited in zoos.  This is partly because they handle well and are a very sociable species.

True to his breed, Georgie is a very friendly dragon, despite all of the hardship he has suffered.  He loves nothing more than cuddling with his human and chilling out on the settee.  He’s also a fan of climbing the household plants in the conservatory and watching the world go by.

This bearded dragon lives in a busy household that also includes dogs, other lizards and a tortoise although the species never mix but are visible to one another.  He is also regularly handled by visitors of all ages, including young children, due to his exceptional temperament.

He is now a healthy and active dragon, friendly and easy to handle; he’s a fine representative of his breed.

Georgie the bearded dragon is sociable, adventurous and inquisitive.  Due to his adorable temperament, this dragon is happy to work with people of all ages and is easy to handle, even for young children.

Georgie is a steady lizard making deliberate movements, so doesn’t run off or flit about.  This means he is easy to capture in movement and easy to handle by actors and actresses who aren’t used to handling lizards.

Because Georgie is so adventurous and has a confident nature, he can work well in many environments. He is bold and assured so after a short settling in period, he is happy in most environments.  This bearded dragon is very happy being handled and enjoys being close to human companions.

Because of his slight underbite and the way he cocks his head, Georgie is a funny dragon to look at.  By their nature, bearded dragons are comedic in nature, and looks.  This makes him suitable for a variety of tongue in cheek comedy roles or comic sketches.  His movement, whilst standard for his species, is fascinating to watch, even when acting completely naturally.  Bearded dragons typically like to stroll, climb and perch on elevated spots where they can survey their surroundings.  They often enjoy watching humans and are famed for what is known as ‘the stink eye’, which looks particularly grumpy!  This characteristic, along with his underbite which has the appearance of a smile, makes Georgie suitable for a wide variety of emotive roles.

Georgie can work outdoors and indoors providing it is a secure environment.  This allows for a variety of backdrops and settings to be utilised.

Georgie is a sweet-natured bearded dragon that loves his food and occasional treats.  Appropriate feeding helps encourage handling which, in turn, makes photography and filming easier to achieve with Georgie.

Georgie is confident within stills photography roles and is happy to be placed around products and props which is perfect for branding opportunities.

Because the species is so fascinating, observation filming is very interesting, so little needs to be done to achieve a great action shot.  Georgie can be lured into certain actions with the temptation of food.

Georgie is primarily the standard sandy colour of the species, but his morph is known as ‘lesser red’ due to the red shading on his body, which is more prominent on his chest, chin and face.  His neutral colouring will work against a variety of backdrops and colour palettes, making branding and product placement easy to achieve.

Able to confidently work with models of all ages, Georgie thrives when being handled, so fashion photography works really well for this lizard.

Due to his unique body shape and underbite, Georgie has wonderful facial expressions so is really suited to close up photography.

It’s worth noting that bearded dragons require suitable heating and UV lighting according to their breed requirements and should not work for prolonged periods without this facility.  They are also not suited to working in the evening (or in darkness).  It’s also important to consider that bearded dragons should not be worked with when they are ‘in shed’ as this can cause discomfort to the lizard.  Shedding is a natural process where the lizard sheds their skin.

Georgie is an appropriate lizard model for reptile products including housing, supplements, foods and toys.  He also suits exotic locations and the summertime vibe since he is a desert animal.

To date, Georgie has had a stills photography session on location.  He handled beautifully and coped well with studio lighting and flash photography.

Georgie is an impressive lesser red bearded dragon.  His quirky body shape ensures a unique bearded dragon, instantly recognisable.  His good looks and temperament make him a priceless reptile to work with and he is a fabulous addition to any next TV, film or media project. 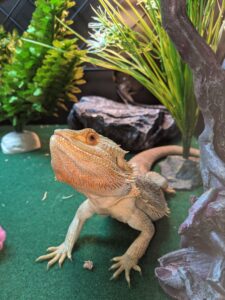 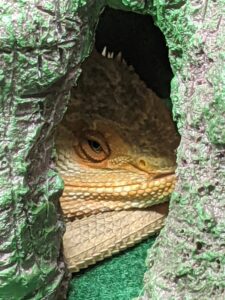 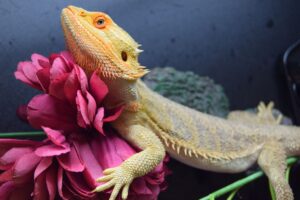